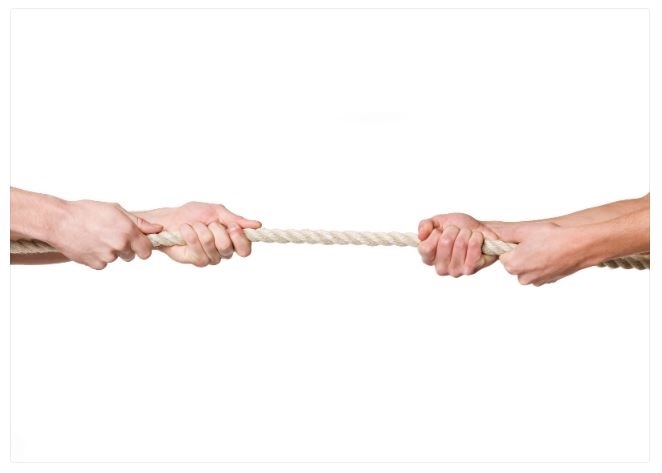 The Asset Allocation Tug of War

In general, I'm a firm believer in sticking with what works for you. Don't blindly follow what works for others. We're all different, and many of us have different goals to achieve on completely different time frames. We’ve been taught that taking greater risks in our asset allocation could possibly produce greater returns. This is known as Modern Portfolio Theory. I’m not here to argue the validity of that train of thought because, for the most part, I do believe that’s true. However, we often become greedy and overlook the fact that there may sometimes be alternatives that can get us to our final goals with less headache.

The following is a chart of an exchange-traded fund (ETF), which tracks the S&P 500 under the ticker symbol SPY. Owning SPY is the equivalent of being 100% invested in S&P 500 stocks, which is an aggressive allocation. This is the exciting side of the investment world because every movement is closely tracked and reported by financial news outlets.

Now let's talk about bonds, which most people view as a boring allocation and assume they won't help them reach their goals. Although they may not be the next hot stock pick, you don't need hot stock picks to succeed.

The image in the top panel of the following chart is an ETF that tracks the 20-year treasury bond under the ticker symbol TLT. Long-duration bond ETFs in general have had a stellar year, as the chart shows. I've placed in the bottom panel a relative-strength chart of SPY versus TLT. We get the relative-strength by dividing one holding into the other. It’s a simple division calculation using a numerator and a denominator. If the numerator is stronger than the denominator, the line will go up. When it's weaker, the line will go down.

When we look back to 2018 we see that SPY was outperforming TLT, depicted by the line moving higher and illustrated by the green arrow sloping upwards. After the waterfall sell-off in the 4th quarter of 2018, that strength dissipated and bonds took the lead. Notice that the relative-strength line is moving lower with consecutive lower highs, illustrated by the red line. 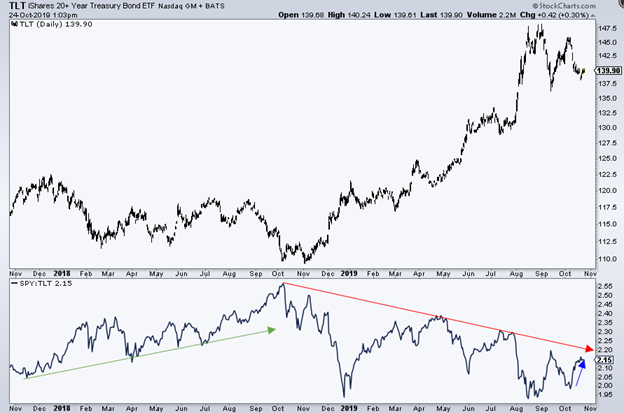 The ticker symbol AGG in the following image is an ETF that tracks U.S. investment-grade bonds and shorter-term treasury bonds. It too has had a great year thus far in 2019 and has continued to push higher all year. As I previously did with TLT, I've also compared SPY to AGG on a relative-strength basis. While not quite as impressive as the returns from TLT, it too has had pockets of outperformance over SPY. 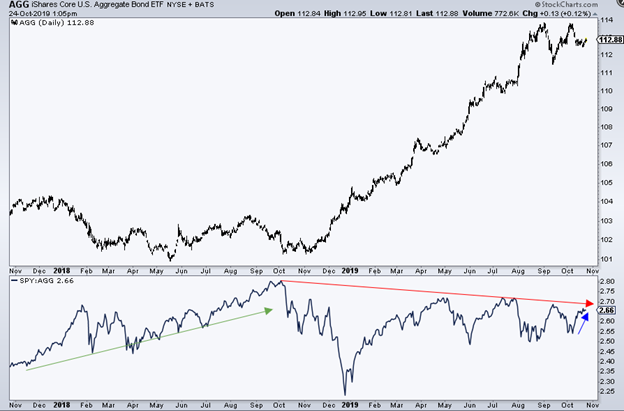 Which ETF has performed the best? The following chart shows, as of the date of this writing, the trailing 1-year performance is: SPY (11.79%), TLT (25.73%) and AGG (11.10%). Were we to look at performance over a longer time frame, we might see that SPY has drastically outperformed TLT and AGG. The same goes for pockets on a much shorter time frame. However, those returns from bonds are nothing to scoff at.

The reason I’m illustrating the recent strength of bonds over stocks isn’t to discourage people from investing aggressively. My point is: During certain times you can actually outperform equities with bonds — as well as with other asset classes — and reduce volatility substantially. Looking at the performance chart, AGG basically got the same returns as SPY over the trailing 1-year, with little volatility. I don’t know about you, but I’d rather take the less-bumpy route.

I'm reviewing this in hindsight. But the next time you're questioning your allocation mix, don't forget to look at the relative-strength charts and attempt to pick the smoother ride to reach your goals. This doesn't just apply to bonds. It also applies to other asset classes such as gold and real estate. Don't fall in love with any one asset class. Attempt to use the asset class that helps you reach your goals. Remember: The goal is to make money. There's no extra credit for taking an aggressive path. If you would like to hear more about our thoughts on asset allocation, click here.