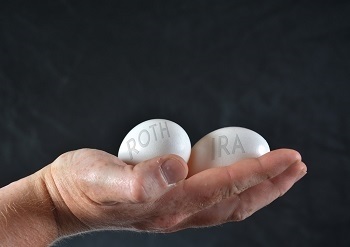 Should I fund a Roth or Traditional IRA/401k?

There is a debate whether you should contribute to a traditional or Roth IRA or 401k (if your company even has a Roth 401k option).

This is an important decision, now more than ever. A growing number of work retirement plans (401k, 403b, etc.), have a Roth contribution option. That means one of your largest assets could be a Roth 401k. In the past, an optional Roth with a smaller contribution limit per year was your only choice. Now you can have a larger annual contribution put entirely into a Roth account at your work retirement plan. Keep in mind the match and profit sharing is always deposited into a traditional account. So, what’s right for you?

So, if both accounts have the same amount, invested in the same securities, the question you have to ask yourself is: “Are taxes higher today than they will be when you retire?”

Some people favor a Roth IRA or Roth 401k right now. Members of Team Roth feel that taxes can only go up. They would rather pay tax now than pay taxes in the future.The United States has $20 trillion in debt as I’m writing this in September of 2017. We’ve got unfunded liabilities with Medicare and Social Security that will be crushing as Baby Boomer’s retire. The only answer to these issues: higher taxes. But not so fast…

We can go through U.S. history and find several examples where taxes have not just gone up, but gone down.In the 1920’s, the top marginal rate was slashed from 70% to 25%. The Kennedy administration took the top marginal rate from 90% to 70%. More recently, we still hear Republicans talk about the Reagan tax cuts of the 80’s and Bush’s tax reduction at the beginning of the millennium.

Those who favor the traditional IRA feel that their highest working income will be so much higher than their retirement income years.It really doesn't make sense to do a Roth IRA.A good example would be a doctor, like my father.When he retires, he doesn't need or want the big income that he had when he was a physician.All his debts will be paid, he would have built up lots of assets, and his income stream does not have to be as high as it was when he was running a business. Therefore, the traditional IRA for a higher wage earner may often be a good idea.

Now, if taxes go up when my father retired, then it wouldn’t have been a bad idea just a less-good idea.Because if retirement income needs are significantly lower than while working, tax-rate increases have less effect.

The bottom line is we don't know what tax rates will be when you retire. Furthermore, wise planning shouldn’t be based on getting that one prediction correct. Consider having both traditional and Roth IRA accounts perhaps in equal value at retirement.

Academic studies are needed to model what would happen, since the inception of the Roth had you chose one or the other and retired dollar for dollar.Those studies haven't been done yet, but I'll keep looking.

If you’re interested in learning what’s right for you personally, click here to contact us to schedule a conversation to see if we can help you.