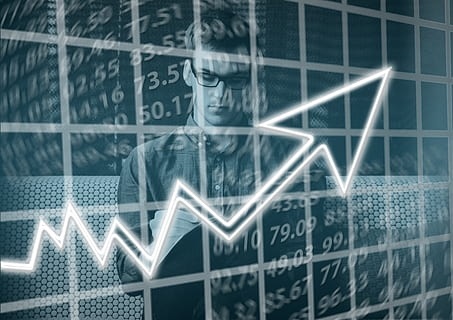 Is the Stock Market Detached from Reality?

The stock market feels broken. Currently, more than 108,000 Americans have lost their lives to the coronavirus. Unemployment has now reached 42+ million Americans. Stimulus checks have been mailed to many just to keep them afloat in these difficult times. There’s currently rioting and looting in many cities across the country. And there’s even been talk of active-duty US Military troops being deployed to the District of Columbia for riot control.

According to the Federal Reserve Bank of Atlanta, their GDP model estimates -51.2% second quarter GDP growth. S&P 500 earnings per share estimates have plummeted. Many companies have lowered or completely removed forward guidance. Bankruptcy announcements have been made for many popular companies we're all familiar with. The Federal Reserve has ballooned its balance sheet to incredibly high levels, in a noticeably short period. Who is going to pay for all this debt, and at what cost? I guess that's a problem for another day.

Most would guess the stock market would be much lower based on the comments above. However, the market has a mind of its own and will do strange things at strange times, with little sympathy for one's hardships. As of this writing, the S&P 500 is only down roughly 4% year-to-date. Since the year began, the market had a 35% sell-off from the February highs and has since rallied roughly 40% off the March lows.

The start of 2020 has been a strange year to say the least. During the sell-off in March, I began to see a spike of interest in those that wanted to become day traders. I was getting phone calls from friends I hadn't spoken to in years. They all spoke highly of a specific trading app and asked how much traders could make. I brushed it off and didn't think much of it. As the sell-off increased, I began to think about the tough lesson they were about to learn - a dollar can disappear quickly in the stock market.

As the sell-off intensified, it didn't seem to sway the newcomers. Inexperienced participants remained eager to plow their money into the market. They wanted to take their last few thousand dollars and trade it. The speculation seemed to intensify and there didn't appear to be the level of fear normally felt at market bottoms.

These new traders weren't excited about the idea of just buying stock or investing long-term. They wanted to take the speculation to the next level by using leverage and buying call options in popular companies we all know. This was just a personal observation. I've also read theories that maybe the uptick in speculative trading could be due to casinos and other gambling ventures being shut down during the coronavirus lock down. Some of that money may have flowed into the financial markets while people were stuck at home. That would tend to make sense.

I decided to look at a few terms on Google Trends to see if there was an rise in website activity for certain phrases being searched - and there was. I've posted the screenshots of the searches below. There was a large spike in March, which can be seen in the following slides for the different phrases I searched. 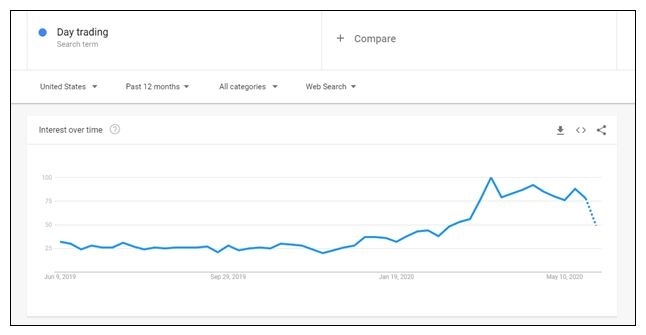 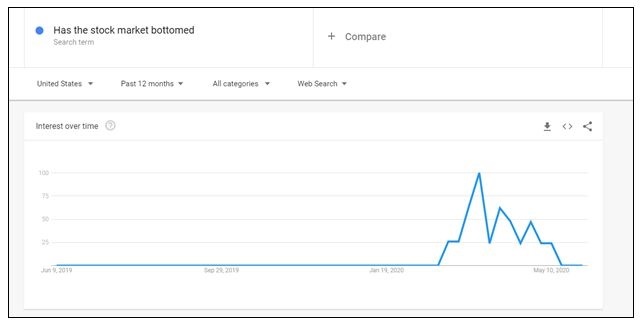 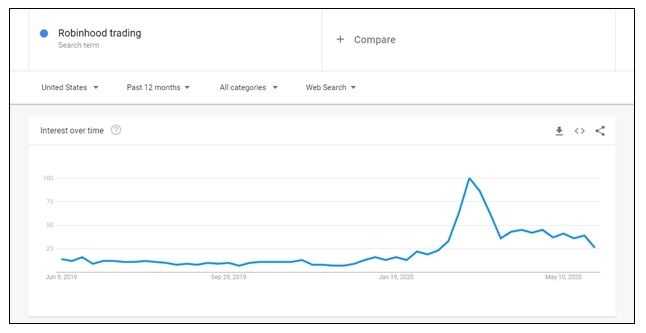 Source for all slides above: Google Trends

And it's not just Google searches that have seen an uptick in activity. Below is a slide from Sentimentrader.com showing the sharp increase recently in retail trading levels. During the coronavirus sell-off, the trading activity went completely vertical. 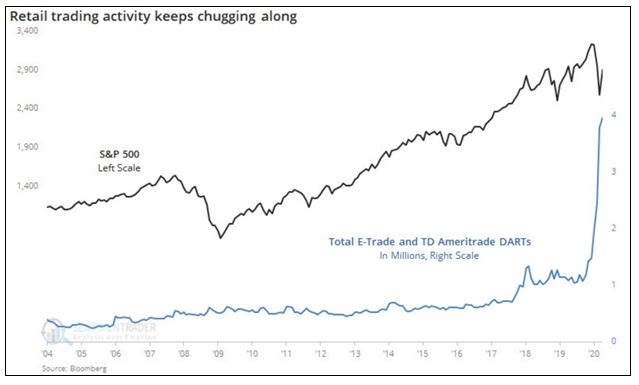 Point being, we live in unprecedented times and market behavior can be quite shocking. The current market action is a good reminder that what investors think should happen, rarely happens. I've always relied solely on technical analysis to make market decisions. I pay attention to all the information, but technical analysis gives me the buy and sell triggers. Fundamentally, from what I'm seeing, the economy looks to be in dire straits. However, on the technical side, price is saying the long-term trend is neutral or bullish, depending on the time frame.

Is there more pain to come? Nobody knows. Times like this show how important it is to have a predetermined plan. Things may not feel good, but it's important to stick to your written plan. Otherwise you're making investment decisions based on emotion, which is no better than gambling. Unfortunately, I think some of the new money flowing into the market has chosen to gamble.  Does your financial plan need a check up?  Click here.