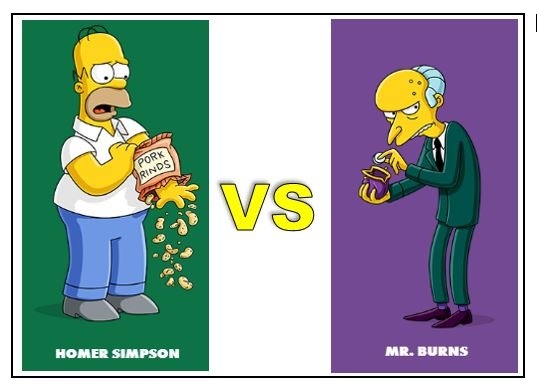 The Simpsons used to be viewed as a portrait of a lower-middle class family. You remember Homer, Marge, Bart, Lisa and Lisa, don't you? They had a house, car, job security, and a single wage-earner who didn’t graduate college. These days, that's beyond unattainable.

As you will recall from my previous blog, Facebook, FOMO and Financial Pressure Part 2, the 1% live upstream. They get the newly printed money before the rest of us do. That's why. The connection may not seem apparent at first, so let me tell you a story.

This story is fictional and not a recommendation to purchase any stock, real or imaginary. The use of copyrighted characters is protected under the Fair Use Clause of the Copyright Disclaimer Under Section 107 of the Copyright Act of 1976. So, don't have a cow, man!

On the Simpson's, Mr. Burns owned the nuclear plant in town. He was in the Springfield 1%. The bank was happy to lend him money to expand his operations. As the increased revenue rolled in, Mr. Burns paid as little of the loan off as he could because rates were so low.

Did he give his workers, like Homer a raise? Of course not. Instead he purchased shares of his nuclear plant thereby increasing the value of the stock. Who do you think owns the most nuclear plant shares? Mr. Burns of course!

At first, Homer and his co-workers foment rebellion because they haven't had a raise in years. Mr. Burns, under sage guidance from Mr. Smithers, introduces a new benefit. Out of the kindness of his shriveled heart, Mr. Burns has started a 401k with a Safe Harbor match. If Homer puts in 5% of his wages, he'll be matched at 4%. But wait, there's more! Not only does the 401k have low-cost mutual funds it also will allow you to invest in nuclear plant shares.

Even though his head looks like a light bulb, Homer isn't the brightest guy. He sits through the enrollment meeting, day dreaming about enrolling in clown college, Homer Daydreams about Clown College. Besides, with three kids and a mortgage he needs every dollar to hit his bank account.

Even in sleepy Springfield, prices keep going up. Low interest rates have made real estate prices soar. Low interest rates have pushed people away from safe CDs and into higher return, higher risk nuclear power plant stock. Student loans have allowed Springfield University to raise tuition rates year over year. His daughter, Lisa, will need to get some student loans because Homer hasn't been able to save up. As such, Homer can't seem to escape the trap of stagnant wages and rising expenses.

When it comes time to pay his taxes, Homer on Tax Day, Homer does his very best to find ways lower his taxes. But, alas, he pays an effective tax rate of 12%. Mr. Burns, conversely, pays about 16% effective tax rate. How does he do it? First, the dividends from his nuclear power plant stock are qualified, meaning he only pays 15% on those millions of dollars. Second, Mr. Smithers handles his tax situation with a team of accountants who specialize in tax mitigation strategies.

Unfortunately, the Springfield bank can’t keep lending out easy money as interest rates rise. The economy slows down, and people don't need as much electricity. Mr. Burns is having a hard time servicing his debt and may have to declare bankruptcy. Seeing the trend Mr. Burns sells his stock at a profit and will only pay 15% tax on capital gains. Homer's incompetence causes a reactor meltdown and the stock plummets. There are layoffs at the nuclear plant. However, the Springfield politicians realize that the nuclear power plant is simply too big to fail, so they vote for an emergency bailout to the cheers of many. The residents are happy to keep their jobs but forget that taxes to pay for the bailout come from their wages. They've simply bought their jobs from Mr. Burns, so to speak.

The political climate today casts Homer as a victim and Mr. Burns as the villain, just like the cartoon. Politicians would like to cast you as either a victim or a villain. Neither is true. The inequity and imbalance of the Springfield economy above is an allegory to our own Federal Reserve system and United States tax code.

However, until monetary policy and tax codes change, you can't stay Homer Simpson. You have to become Mr. Burns. First, realize that we live in various stages of an asset bubble euphemistically called a "business cycle" and invest accordingly. Second, take from your stagnant wages and invest in assets. The tax code let's you do this through qualified accounts that turn wages into assets and defer taxation. Finally,

Don't fight the Fed, don't fight the tax code and stop complaining about the 1%. Instead, adapt to the world they have created. Would you like help? Click here.